My dog won’t bite: What healthcare and social workers need to know.

When we think of healthcare worker safety and worker protection we will often zero-in on violent or unstable patients or relatives, but what about over protective, badly trained or simply dangerous dogs! In a press release yesterday from WFSB in CT, it was announced that Plainfield police have arrested two individuals after their dogs viciously attacked a healthcare worker who was caring for an elderly patient. Lynne Dennings suffered what were described as “brutal injuries” to her face, chest, arms and legs as a result of the shocking attack. Once again, we see those mobile workers, responsible for extending the healthcare remit from the hospitals and clinics being put at risk of attack simply in doing their jobs. So what can be done in this case in particular? It’s certainly a departure from the areas we traditionally advise on. We’ve scoured advice sites for tips and advice in relation to pet management and what to be aware of. 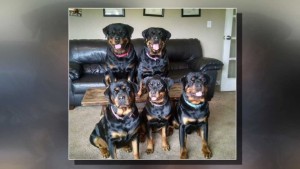 The dogs in question are Rottweilers, notorious  as being one of the most common breeds for unprovoked attacks, and the photo footage of them shows that there were many of them in this case.

Dogs are pack animals and having multiples of the same breed is increasing the instincts of the dog’s “pack drive” – one of the dog’s natural instincts to work in a team/family. This in conjunction with a strong “fight drive” will lead to one or more of the dogs asserting dominance over territory, or if submissive to a human owner, it will aggressively protect that individual.

The AKC describes the Rottweiler as:….protective of their territory and do not welcome strangers until properly introduced. Obedience training and socialization are musts. 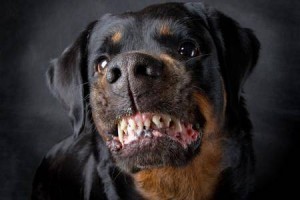 GuardianMPS suggest that those responsible for community and field work in residential properties with animals consider introducing a series of protective measures and special conditions or observations for owners as below.

Lock all roaming dogs away.

If a community healthcare or social worker comes into contact with a patient’s or other present dog they should firstly insist that the animal be locked away out of the area of care in a room, cage or other un-breachable structure. Owner protests of dog innocence and track record are only indicative, they are not guarantees of good animal behavior. present, insist that they are removed from the area during the visit

Healthcare and social worker agencies and clinics should consider updating community work training to recognize breeds and dog social tendencies according to those now recognized as viable hazards. According to dogsbite.org

If a worker has a concern that one of the many hazardous dog breeds is present, they should insist that they are removed from the area during the visit . The statistics on death and maimings from dogs implicate a number of powerful animals, each representing a huge threat to the visiting ” strange” worker’s safety.

*Chart ordered by number of deaths; includes only a portion of breeds listed in report.*Dog attack deaths and maimings, U.S. & Canada, September 1982 to December 31, 2014, by Merritt Clifton, Animals 24-7, December 31, 2014. *Represented dog images above (particularly those of hybrid breeds) not specifically detailed in this table are not confirmed as dangerous in the report. * Images are for illustration purposes only. All images from Wikipedia and used under CC license.

Dogs will typically not bite without displaying some preliminary warning signs or specific behaviors.

Some areas to look out for:

If multiple dogs of the same breed are present, view this as an indication of the potential of pack drive and pack mentality on the part of the dog. Depending on the dog breed this may make an attack increasingly more likely and even in the case of a less aggressive or harmful breed, it can still exacerbate an attack and result in harm. If owners refuse to lock them away as per the recommendation, the worker should explain to the patient and potentially (and with approval to do so) leave the worksite immediately, informing their office of the potential threat.

Make your supervisors are made aware of the presence of multiple or dangerous dog breeds at the address/location as a viable hazard to be entered into future risk assessments. Such information should be considered by the safety planning bodies to form suitable policies such as sponsored or authorized walk away policies as described above. Failing to adhere to indicators, factual evidence or even a sense of threat or concern may result in a tragedy of avoidable death and injury to the worker and investigations, citations and litigation to their employer.

GuardianMPS users faced with the scenarios above will have a number of personal safety measures and features available to them to safeguard their wellbeing, record details and background information of a threatening situation before it escalates and inform supervisors and other team members if available. They will have checked in and recorded detail about their work assignment. Who, where, when, for how long? If faced with the threat posed by a dangerous animal, they could raise an instant panic alarm – even if the animal is docile and doesn’t attack, our trained Central Station Monitoring team will be able to advise nearby supervisors and or team members of a low level threat concern and if clearly in distress notify 911 with a full account and location data to aid response. The worker could potentially leave the site having recorded a detailed audio message as part of the running incident. In such a case the audio message can be listened to by supervisors or managers on the GuardianMPS customer portal.

GuardianMPS users will learn that Panic Alerts are not reserved for situations of aggression or those which result in actual suffered injury. EVERY threat, concern or suspicion should be raised as an alert-simply as a precaution. False alarms are EXPECTED in GuardianMPS and no penalty exists for excessive use. For more information on GuardianMPS and how it helps visiting workers should they feel threatened for any reason call us on 610-205-2972 or send us a message.