Hospital administrations and the judicial system do little to prevent assaults against nurses and other caregivers by patients In a harrowing video that surfaced in 2014, a 68-year-old hospital patient attacks a group of nurses with a pipe pulled from his bed. They flee through a nearby door in a streak of rainbow scrubs, but the patient pursues and lands several more blows on one fallen nurse in the hallway. This assault is far from an isolated incident. Health-care workers are hit, kicked, scratched, bitten, spat on, threatened and harassed by patients with surprising regularity.

In a 2014 survey, almost 80 percent of nurses reported being attacked on the job within the past year.

Health-care workers experience the most nonfatal workplace violence compared to other professions by a wide margin, with attacks on them accounting for almost 70 percent of all nonfatal workplace assaults causing days away from work in the U.S., according to data from the Bureau of Labor Statistics. And attacks show no sign of slowing down. There is little movement toward stopping the assaults.

“There is a top-to-bottom cultural assumption that violence is part of the job” for ER nurses and health-care workers, says Lisa Wolf, a registered nurse and research director for the Emergency Nurses Association. “It goes from the bedside up to the judicial system.”

But organizations such as the ENA and the American Nurses Association as well as government agencies involved in occupational safety say this doesn’t have to be the case. After the episode in Minnesota, the hospital initiated a training program to teach workers how to recognize and de-escalate potentially violent situations. Many hospitals lack this basic safety measure, however—an oversight that leaves caregivers vulnerable. Better violence-prevention plans—including training and incident reporting—can lessen the risk, but their adoption is stymied by indifference from police, prosecutors, judges and hospital administrations. The general disregard discourages health-care workers from reporting assaults, thus compounding the problem. 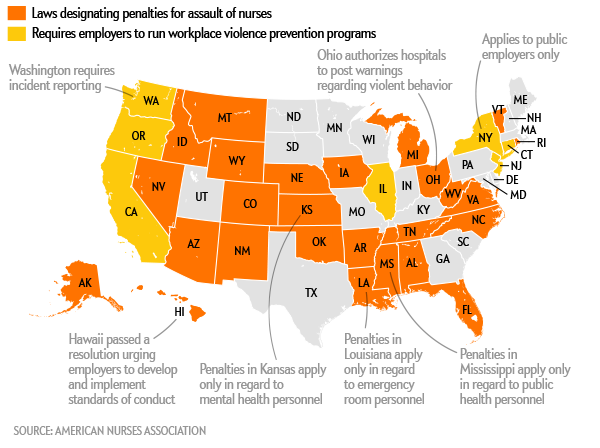 “As you get more and more distance from the epicenter of the problem in the ER, people really feel like their administrations are way less engaged in mitigating violence,” Wolf says. “It makes people less invested in the work that they do because they feel less supported.”

Nurses often have to get uncomfortably close with extremely stressed-out people, so an element of aggression is perhaps inevitable. Some assaults come from people experiencing psychosis or other mental crises. Dementia and in-home-care patients are also frequent sources. Much of the violence is less explainable, however. In the 2014 survey, almost 50 percent came from patients and family members who were drunk or on drugs. Plenty of people attack nurses out of simple frustration. Rita Anderson, an Arizona-based nurse who was instrumental in passing New York State’s violence-against-nurses legislation, tried to bring charges after a girl in her late teens broke the nurse’s jaw. “When I spoke to her later in the evening, she said she was just tired of waiting,” Anderson says. Police and prosecutors “don’t necessarily feel that this is a big issue unless someone is hurt very severely, even though there are felony laws against it,” she says. Her suit was eventually scuttled. Nurses who have reported attacks say that acceptance of the violence runs through hospital administrations as well as the judicial system. An article, “Nothing Changes, Nobody Cares,” published this July in the Journal of Emergency Nursing, sums up the general sentiment among health-care workers who are attacked on the job. Wolf and colleagues interviewed 46 ER nurses who described sympathetic supervisors but passive hospital administrations. In a 2011 ENA survey, about half of nurses said that the hospital took no action after they were assaulted, and in another 20 percent of cases, the perpetrator was issued a warning. Ten percent of nurses said they were blamed for the incident. Jeaux Rinehart, a registered nurse for more than 30 years, was working at Virginia Mason Medical Center in 2008 when a patient seeking methadone attacked him with a billy club, breaking his cheekbone. He says that hospitals tacitly discourage nurses from pressing charges, and describes two incidents in which colleagues were reprimanded for their assault.

“There is a constant message being sent to nurses that they are responsible, that places the blame on nurses for their attack,” Rinehart says. “It comes from a lot of institutions.”

The lukewarm response from management deters workers from reporting incidents, further obscuring the issue. Studies suggest that more than half of physical assaults on nurses and up to 80 percent of verbal abuse goes unreported. At the same time that nurses are blamed, hospitals do little to prepare them for what lies ahead. “We keep hearing the recurring theme that we aren’t getting any workplace-violence-prevention training in our nursing curriculum, we’re not learning it at our institutions,” says Daniel Hartley, an epidemiologist and the National Institute for Occupational Safety and Health (NIOSH) coordinator for workplace-violence-prevention research. “There’s nothing worse than a novice nurse going into health care and not realizing that he or she will encounter physical and verbal abuse on the very first day on the job.”

Violence-prevention programs reduce the risk of assault by training workers to recognize frequent cues, such as drug use and threatening body language, and educating them about strategies to help defuse situations. Accurate incident reporting is a crucial part of this type of intervention, as it helps hospitals identify specific hazards, such as poor lighting, understaffing, and inadequate safety training, and take steps to remedy them.

In a 2011 ENA study on workplace violence, hospitals with mandatory reporting policies experienced half the rate of physical violence as hospitals without reporting policies. The Veterans Health Administration has successfully reduced assaults in its hospitals by electronically flagging high-risk offenders, such as people who have been abusing drugs and alcohol and those with a history of attacks on caregivers, who are then treated with extra precautions.

The Occupational Safety and Health Administration (OSHA) issues guidelines for violence-prevention programs, but there is no federal statute requiring hospitals to adopt them. Several states have passed laws making it a felony to assault a health-care worker, but only a few have included provisions for violence-prevention training and incident reporting. Hospitals are generally left to monitor themselves.

Since the government doesn’t collect the statistics, it’s impossible to know exactly how many hospitals lack adequate safety protocols, but ENA surveys suggest that the number could be substantial. Some hospitals have comprehensive violence-prevention programs, but many nurses report that they receive minimal to no workplace-safety training and must learn on their feet when a situation turns violent.

Before his assault in 2008, Rinehart recalls one half-day training session about five years earlier on how to protect yourself in the event of an attack, “like how to get out of a choke hold,” but it lacked elements such as how to recognize and defuse aggression. “The prevention piece was completely missing,” he says.

NIOSH developed a free online training program that went live last year. Hartley reports that they’ve had more than 8,000 people complete the module so far, but individuals must seek out the training on their own time. NIOSH could not say whether any institutions have made the module part of their workplace-violence curriculum. They have done some hospital outreach, but it has mostly been “nursing associations bringing [the module] to management,” Hartley says. And buy-in is still an issue.

When Anderson was working on the New York State Violence Against Nurses law in the 1990s, the state senator sponsoring the bill “recommended that we just get legislation passed that made it a felony to assault a nurse and didn’t require all kinds of education and training programs,” she says. “He said it would be very costly and make it harder to get the legislation passed,” and predicted opposition from hospitals.

The New York law now requires institutional workplace-violence prevention, but only from public employers. The cost of violence prevention is small, however, when compared to the amount that hospitals lose in worker-compensation lawsuits every year and in time off due to injury—roughly a third of which is patient-inflicted, according to OSHA statistics.

“There needs to be a cultural change that it’s not okay to hit a nurse,” Wolf says. “Until then, any intervention that is attempted is unlikely to be accepted.”